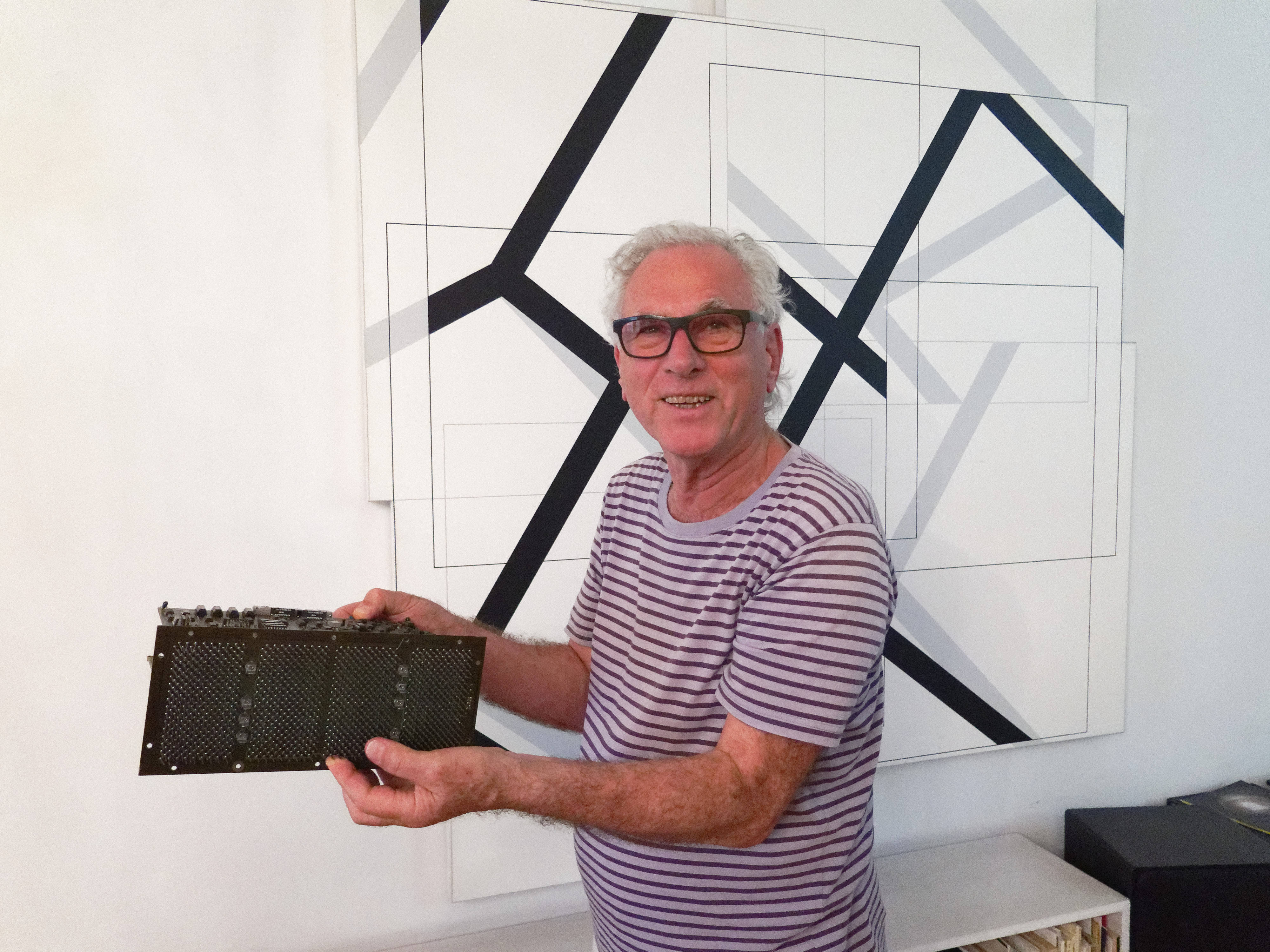 Digital Artist Manfred Mohr in his loft in New York

Manfred Mohr is an internationally renowned pioneer of digital art. He was one of the first artists to replace brushes and canvas with computers and plotters. Among his numerous awards is the ACM SIGGRAPH Distinguished Artist Award for Lifetime Achievement in Digital Art, which he received in 2013. He was honored by the ZKM / Media Museum, Karlsruhe, with a retrospective exhibition, “The Algorithm of Manfred Mohr.” He is currently represented in the exhibition “Artistes & Robots” at the Grand Palais in Paris.

Gerhard Schimpf, who has been a friend of the artist for a lifetime, visited Manfred Mohr in his New York loft to talk to him about the digital transformation from an artist’s point of view.

Which steps have moved you to use computers to express yourself artistically?
I have to say that was a development that went on for several years. I came, as you know, from jazz. Music is an abstract world in which I developed artistically. I came to visual art, to painting, much later, and it was the abstract aspect of music that inspired me the most and led me to become a visual artist. I never wanted to interpret the world but to create my own world. The art of the ‘50s and ‘60s was largely “Abstract Expressionism” and I realized very early that one cannot plan this type of art but must approach it in endless experiments to get good results.
I spent a lot of time thinking about how to make an art whose execution is manageable so that I know what I want to do before I start. The writings of Prof. Max Bense, who at that time was a professor of philosophy at the University of Stuttgart, influenced me profoundly. Bense, who was a physicist and mathematician, applied early aspects of computer science theory to aesthetics and fine art. He wrote, “In today’s technological world, one should make a rational art.” This term “rational” hit me like a lightning bolt.

Using abstract geometric signs, I tried to create rational art, but it quickly became clear to me that while the execution was rational, the content was not. For several years, I tried to find out what rational art could be and how to make such an art. At that time I lived in Paris, where in 1967 I met the French composer Pierre Barbaud. This was an important meeting for me because Barbaud had been composing his music with a computer for some time. In long conversations with him, I realized the direction I had to take. The idea of ​​a rational art suddenly took shape. I had to learn programming to develop algorithms that would then generate my art. After learning the programming language FORTRAN, I had to find a computer, which was almost impossible for an artist in Paris in the ’60s. Such huge machines were found only in large institutions that had air-conditioned rooms; they cost millions of dollars and were shielded from unauthorized personnel.
As so often in life, coincidence played a major role: I saw a broadcast on French television about the computer center of the Météorologie Nationale in Paris. They demonstrated a large automatic drawing table on which the weather maps were drawn, and I saw immediately that this was the device I needed to realize my drawings. Naïvely, I asked  at the center if I could work on this machine. I was kindly refused, but they suggested that I write to the Ministry of Transport, and there might be a possibility. Without hesitation, I wrote a letter to the ministry. And lo and behold, a few weeks later I received an answer inviting me for an interview with the minister. I introduced myself to him and explained exactly what I wanted to do with a computer and a drawing machine for an artistic statement. The minister was exceptionally nice and enthusiastic and suddenly said to me, “Young man, when I was young, I also wanted to be an artist.” I felt that luck was on my side. With the permission of the minister, I was granted access to use their equipment and over the next 13 years I made hundreds of drawings with the computer and plotter. At first I made very simple linear drawings, starting with musical concepts and translating them into visual processes. Later the cube became my graphic instrument, an instrument that I could play on. The cube was dissected, cut up, turned, and so on.
Bit by bit, I developed greater complexity, that is, I started using higher dimensions. To this day, five decades later, I am still inspired by these Cartesian building blocks. The idea of ​​developing a logic with an algorithm that results in a visual outcome is the basis of my art.

Are your artworks actually creatures of computer science or mathematics and what influence does your life partner, the mathematician Estarose Wolfson, have on your work?
First, I have to say that even when I’m programming, I do not see the computational or mathematical aspect. My aim is to realize my own ideas, and to do that I look for help from different directions, sometimes physics, mathematics, or programming. Although I always have to use elements of mathematics to realize my ideas, I do not consider my art as a mathematical art. It is the result of an idea that, independently of me and its logical content, has to stand alone and defend itself as an independent artistic statement.

Now a big leap to the question of how I met Estarose and what impact she has had on my work. In Paris in the fall of 1969, an acquaintance called me and said that a young American woman wanted to visit him. She was a mathematician and she was working with the computer. He immediately thought of me and told her that he knew an artist who was making his art with a computer. She was interested, and so he arranged for us to meet. Although Estarose and I came from different directions, mathematics on the one hand and art on the other, we shared an interest in the computer and art. As you can see, this was a great encounter, because we are still together after almost half a century.For years I had to look up everything I needed to know in mathematics. Today I can ask Estarose if she knows, for example, a mathematical equation for a problem I have in mind. Or I can ask her if something mathematical can be developed for another idea. For me, this is a great safety net, because she is the only person in the world who can look at my work and say: Something is wrong with your results. She understands what I’m doing and sees right away if anything is logically incorrect.

Which effects of the progressive digital transformation do you perceive and what do these mean for your work?
Even though I’m very interested in technological developments, I don’t feel that I have to use them right away. Actually­–and this applies to every artist­­–if you have an idea, you have to find the right tool to realize it,  and sometimes you must even invent a new tool. My tool is primarily programming and at the same time it’s the reason to use it because it can give me answers to my questions. As with everything, for example, when dealing with computer science for a long time, one develops a deformation professionelle. You suddenly think very differently and cannot resist, for example,  analyzing the works of other artists and looking for profound logical connections. If there is nothing to find, one has the impression that the artist does not understand what he / she is doing.  In music, too, when I hear, for example, minimal music such as that of Steve Reich, it becomes clear to me that here is an artist who works with great clarity in his thinking.

How do you participate in the digital transformation?
It’s automatic for me. Once you set foot on a moving walkway, you drift along without being aware that you just said A and have to say B as well. You don’t really notice that you are right in the middle of it. The world stays normal around me because I am concentrated on searching for the things I need for my art.

With regards to our human coexistence: what chances do you associate with the digital transformation and what risks?
Development always involves both chance and risk: It does not have to be digital.. Every technology creates positive things and negative things. The positive is always what you have to work for, and the negative opens up too easily if you’re not careful. With every technology you have to be careful not to fall into a trap. You always have to discover for yourself what’s good and what’s bad. That makes me think of Isaac Asimov’s laws from the ‘60s on robotics, especially the zeroth law: “A robot must not hurt humanity or passively allow humanity to be harmed.” That was visionary. With just these rules, you have to look at the emerging technology.  I also think of the Canadian philosopher Marshall McLuhan, who talked about progress and machines (The Medium Is the Massage, 1967). Through him I understood that one should see the machine as if it were an extension of oneself. In principle, a machine is not against me but  is primarily something that can make me almost more than human. With the help of the machine I can do things I could only think of before but couldn’t do by hand. At the same time, there is also the danger that the machine might turn against me.Even with today’s highly valued artificial intelligence, we come very close to the dangerous limit of possible self-destruction. The intelligent space that we give to the machine forces us to rethink philosophically and practically a new collaboration “man / machine.”

What risks do you associate with the digital transformation? What does “human being with algorithms” mean to you?
Being human means to me that I can realize myself, I can think, and I can do something that only I can do. What that means exactly, is, so to speak, a lifetime project. In that I see the greatest human satisfaction. Writing an algorithm is a result of my thinking. With this ability to think logically, I realize myself. In terms of my art, it means that everything I do as an artist, including writing an algorithm, upholds this human aspect. Even in a calculation, I always stay Manfred Mohr.

Manfred Mohr, thank you very much for the good conversation and the hospitality.