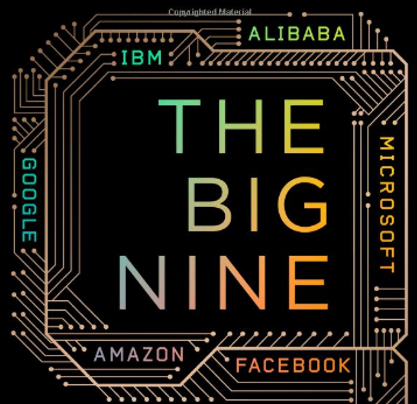 This book written by Amy Webb is about Artificial Intelligence and how the “Big Nine”, in her words how the American giants Google plus MAFIA (Microsoft, Amazon, Facebook, IBM, and Apple) together with their Chinese Opponents, the BAT (Baidu, ALIBABA, and Tencent) are shaping the world with their technology and how they could warp humanity. Amy Webb began her career as a reporter for the Wall Street Journal. She has become a widely respected futurist, author, and founder of the Future Today Institute in Philadelphia. Webb is also a professor of strategic foresight at New York University’s Stern School of Business and frequently advises corporate and government leaders.
Her book is well researched and contains an extensive bibliography as well as notes with numerous internet links. These will allow the reader to dig deeper into the subject. Webb is tough and highly critical at times, but her approach is well-balanced. There’s no hysteria or irrational exuberance in this book. “Fundamentally,” she writes, “I believe that AI is a positive force, one that will elevate the next generations of humankind and help us to achieve our most idealistic visions of the future.”

The Big Nine consists of three sections. In Part I, Webb explains what AI is all about and describes the role that the Big Nine have played in developing it. She also briefly sketches the history of artificial intelligence from the 17th century to the present. This is a fascinating treatment of the subject and reaches farther back into the past than many similar books.
Part II includes three imaginative scenarios for how AI might play out over the next 50 years.
In Part III, Webb introduces her prescription for action to stave off the worst of the problems that might arise from the shift from ANI (weak AI or artificial narrow intelligence) to AGI (strong AI or artificial general intelligence). And she makes clear that those problems may represent an existential threat to Western civilization as we know it today.

You need not to follow her projections into the future but the different approaches taken by the world superpowers are problematic and the conflicts are obvious. On one hand there is no long term strategy, the free market is dominated by short term product development to satisfy the profit hungry Wall Street without regard to consequences. On the other hand there is China with state-level surveillance using AI technology supplied by big companies in an effort to create an obedient populace.

This book provides a wealth of information about where we currently stand in AI technology and where we could end up. It is an eye-opener and a wake-up call. It is up to us to become active and steer the course away from disaster.